The latest from The Red Petticoat - Diamond in the Rough

I'm super excited to announce the latest in the Red Petticoat Saloon series today - Diamond In The Rough - a collaboration between two of my favourite authors in the genre; Abbie Adams and Maggie Ryan.

And what a gorgeous cover! 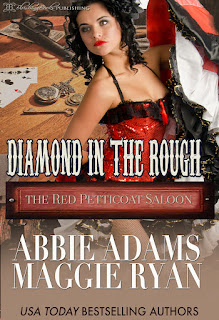 Marshal Tripp Houston makes his own luck and doesn’t believe in chance—until Lady Luck smiles up at him with her cat-like green eyes. If it’s the last thing he does, Tripp is dead set on bringing down the vile Shotgun Slick Gang. It’s been said that the outlaws have a woman traveling with them. Tripp is almost certain that woman is Diamond, especially with her sneaking around and asking lots of questions. But, if he’s wrong, and she is the innocent she proclaims, then once every last slimy one of the gang are swinging from a tree, he plans to hand in his tin star and settle down with the little card-dealing gem who ran away with not only his horse, but his heart as well. After all, he knows just how to tame a feisty gem.

Diamond won’t take no for an answer, especially when it comes to those bossy men of Culpepper Cove standing in the way of finding her sister Damaris—not even when it means she will end up with a hot, achy backside over the knee of one very stubborn lawman. The trail she’d been following for months led her to Culpepper Cove and The Red Petticoat Saloon where she entertains the men while dealing blackjack and sifting through their conversations for information that will help her find Damaris—but she doesn’t go upstairs. That is until the night she makes a silly bet, (it had worked for Jewel, hadn’t it?) and ends up falling for the man who tried her patience at every turn. Will the bet cost more than her virginity? She hadn’t wagered her heart, but she may very well have lost it to him already.

This fantastic addition to the hot Western series is available now in all the usual outlets:

Read on for a hot excerpt!

That fear at least was quelled when the marshal held the door open to her and then promptly locked it behind himself. They were alone in the room. She stood frozen, looking at the empty tubs in the center of the room.
"Go ahead and undress while I fill the tub." The man walked right by her. She couldn't believe he expected her to just disrobe. Then she remembered that though there was no concealing wall or even a curtain between the two tubs, there was a privacy screen in one corner. She forced herself not to run towards it though she was suddenly desperate to hide behind its concealment.
"Oh, no, ladybug. You will be naked before me, so there is no reason for you to hide yourself over there. You can just strip right where you are."
She glared at him as mortification filled every part of her being. He was bent on shaming her. This wasn't just some conquest or a prize won and savored. He meant to humiliate her. She turned away from him and her fingers came to the buttons at her neck with trepidation at first. Then slowly as she made it down the row, her irritation built until she stood tall and proud. She would not cower before him or allow herself to be shamed. She was a beautiful, independent woman. She would not let him know how much he affected her.
She stalled only a moment more before pulling her dress from her shoulders. It slid down her sides and landed in a puddle at her feet. Delaney felt naked already and she still had her chemise and petticoat before she even got to her… unmentionables. She peeked back at him as he carried one of the buckets of water that had been heating over the fire to the nearest iron tub. Heat flushed her face when she met his eyes. He was still watching her even though he was pouring the water.
"Keep going, I want you naked," he said, returning to the fire for the next pail.