I love my fellow erotica authors. I read their work, I chat to them, I appreciate it when they take the time to read my stories... but most of all I love the way we all support each other.
Today I'm delighted to be able to host the amazing Morganna Williams, who writes hot, sexy books about all my favourite things...and her latest book is storming up the charts. She's here to tell us alll about it! Over to you, Morganna!

She felt her eyes widen in alarm when he sat down next to her a little closer than she was comfortable with. Good night Irene, but the man was hot! Sex on a stick as Jessica would say.

She swallowed as her mouth seemed to completely dry up and her pulse began to pound in her ears. Master Gabriel was like every fantasy man she’d ever dreamed up in one muscular package of alpha-ness.

Glory blinked in alarm when he suddenly snapped his fingers in front of her nose. “Ms. Walters? I’ve been talking to you. Where did you go off to?”

She felt hot color fill her cheeks as she looked over at him. “I’m sorry, Master Gabriel, I was woolgathering.” Glory looked down, embarrassed that she was messing up this interview so badly.

Firm fingers caught her beneath the chin and brought her head up so she had no choice but to meet his steely gaze. “No more woolgathering, young lady. Now, I asked you why you were here.”

“Yes,” she said softly, the penetrating eye contact making her feel like he could see straight into her soul.

“Yes, sir,” he corrected her.
“What?” Glory blinked, freeing herself from his eyes for a moment.

“You will call me sir while we’re in this room. Understood?” he asked with a brow raised questioningly.

“Good girl. Now, are you ready to explore your submissive nature this evening?” Once again his blue eyes captured hers, allowing her no escape.

“Yes, sir,” she said with a soft sigh. The normal protest dying on her lips, Glory found she couldn’t deny this compelling man. She wanted to please him.

He smiled at her, his blue eyes suddenly warm as they crinkled at the corners. “Then we will begin. Your safeword for tonight is red.”

Then suddenly his hands were at her waist and he lifted her easily to sit on his lap facing away from him.

Glory gasped, her hands going instinctively to wrap around his wrists.
“Glory, let go of my hands, please,” he said firmly.

She immediately let go. “I’m sorry, sir. I’m not used to being picked up.”

“It’s all right, sweetness, but I need your hands out of the way.” His firm hands caught hold of her wrists and lifted them over her head to place them behind his neck. “I want you to hold onto the back of my neck right now. Don’t move them until I tell you to. Understand?”

“Yes, sir.” Glory tried not to think about the way the position lifted her breasts up and out. They looked ready to pop out of the top of the bustier.

“Good girl,” he said soothingly and then he brought his hands up under her skirt and hooked his fingers in the waistband of her panties, slowly tugging them down. She lifted her hips slightly as he worked them off then pulled them down her legs.

Her breath came out in a deep shuddering gasp as she watched him tuck them into his pocket before catching her under each thigh and lifting her legs to straddle his. Cool air kissed her hot center when he spread his legs, opening her wide. 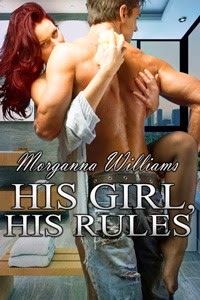 Gabriel has just been going through the motions in life since his wife’s death four years ago, but almost from the moment he sets eyes on her, he wants Glory as his own. Despite never having been taken in hand before, she responds beautifully to a good, hard, bare-bottom spanking, and his dominant lovemaking leaves her breathless. But when Glory foolishly puts herself in extreme danger, she soon discovers that naughty girls who take risks with their safety get their bottoms thoroughly punished… inside and out.

Want to read more? You can get this now at Amazon to see why ALL the reviewers have given it 5 stars so far!