Add to that plenty of internal and external conflict, combined with divine chemistry between Crystal and the hero, Jasper, and you have another wonderful addition to The Red Petticoat Saloon. Read on for a little teaser... 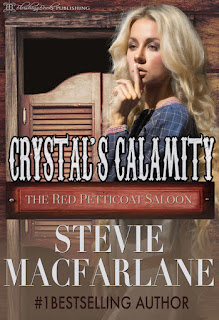 "Jasper implied you two had an ‘understanding'," Jewel continued. "I assumed he had a plan to whisk you away from this life of ill repute," she sighed, unable to stop the giggle that escaped.
The laughter spread around the table as the other girls joined in.
"Lord, I don't understand why some men feel the need to rescue us, when in fact we are living life exactly as we want," Opal sighed. "I don't think being at one man's beck and call is a step up, unless you love him, of course. Otherwise it's simply trading one form of servitude for another and at least we get to choose at The Red Petticoat."
"I agree completely," Crystal said, "which is why when he offered, I refused."
"You refused Jasper Montgomery?" Amy gasped, her mouth dropping open. "Do you have any idea how rich he is, not to mention that body," she continued, rapidly fanning herself with her napkin.
"I prefer to make my money the old-fashioned way," Crystal replied crisply.
Instantly the girls erupted in laughter.
"Well, you can't get any more old-fashioned than making it on your back," Dottie interjected with a snort.

Crystal's Calamity is on sale right now for just $2.99 on Amazon, Blushing Books and other outlets.