If you like sexy Western heroes, scorching spanking scenes and age-play, you won't want to miss the third book in The Red Petticoat Saloon series - His Little Lapis. Written by the amazingly prolific and talented Renee Rose, this story tells of a governess who has secret desires to find a stern Daddy of her own. 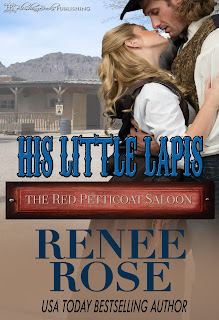 But don't take my word for it... why not read the following excerpt and decide for yourself whether you want to know what happens next!

“If you ever even think about doing something so foolish again, you won’t leave this house for a month, do you understand me?”

Her nose burned. She nodded quickly, dropping her eyes to hide the tears swimming there.

“Take your clothes off.” His voice sounded heavy.

It made her guilt even worse. She reached behind her and untied the sash to her dress, then unfastened the buttons.

Will arranged the chair with the back to the woodpile and sat in it, one ankle folded over his knee, the quirt resting on his lap. He watched her disrobe with an impassive face.

A wave of dizziness rocked her on her feet. Oh—she was holding her breath. She forced it out as her petticoats fell to the floor on top of her dress.
He didn’t say a word, just watched as she removed every stitch of clothing until she stood naked before him, shivering a little, although the air wasn’t particularly cool.

“Over my lap.” He patted his knees and set the quirt beside him propped against the chair.

“Yes, sir.” She swallowed and stepped up to him. She’d never felt so vulnerable naked—hadn’t known it was possible to be this humbled. A real spanking. This was different than all the play spankings she’d had at The Red Petticoat. Different, even, than that first whipping she’d goaded him into giving her. This was serious discipline and even though her body reacted with excitement, guilt and regret made her wish to never repeat this.

Will tugged her across his lap and pulled her snug against his torso with a strong arm around her waist. His hand clapped down before she expected it.
She yelped and squeezed her cheeks together, then did her best to relax them again.

“Toes turned in, bottom up.”

Currently on sale for $2.99, this is a wonderful read even if you haven't yet read the other books set in Culpepper Cove.