Having known nothing but heartbreak and betrayal in Culpepper Cove, Callie Smith seeks refuge at The Red Petticoat Saloon. To the young widow’s utter shock, on her first night working upstairs, former love interest Pastor Lawrence Black bids an ungodly amount of money for an evening with her. After his dominant lovemaking leaves her breathless, he stuns her with a marriage proposal. But how can a soiled dove become a pastor’s wife? Despite her stubborn refusal, he insists she’s now his wife-in-truth and returns night after night, not allowing any other men to touch her.

As time goes on, Callie finds it increasingly difficult to ignore her growing feelings for the stern but kind, handsome widower who issues firm commands in the bedroom and doesn’t hesitate to spank her bare bottom when she disobeys. Truth is, she’d be proud to call Lawrence her husband, but surely her reputation would hinder his calling to become the town pastor. Will he succeed in convincing Callie she’s meant to be his wife? 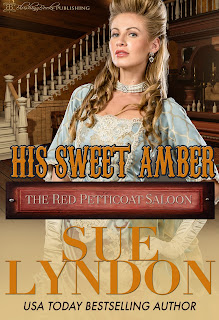 His Sweet Amber is currently on sale for just $2.99 on Amazon, Blushing Books, Kobo and Barnes and Noble.

Here's a little teaser to whet your appetite...

The moment his tongue darted over her pink, gleaming parts, Callie jolted beneath him and her hands flew to his head. She gripped him and groaned, while moving her hips up and down, seeking her pleasure.
The naughty girl.
He pulled back from her center and gave her a stern look.
Her eyes went wide and she immediately returned her hands above her head, but it was too late. She’d disobeyed his instructions, and now he had to punish her for it. Of course, he would be lying if he said part of him hadn't hoped she would disobey.
“I’m sorry, sir.”
His cock hardened every time she called him sir. God, what a beauty she was. And so goddamn sweet. She didn’t belong here. After tonight, he would take her away. He would keep her in his cabin and they would return to town when the circuit judge passed through, when she could legally become his wife. He felt his nostrils flaring with the possession he felt for this sweet young woman.
He moved to sit on the side of the bed, patted his thigh, and gave her another stern look. “You disobeyed, Callie, and you will be punished for it. Over my lap.”
All the color drained from her face, and he realized that she hadn’t protested his use of her given name this time. Perhaps she hadn’t noticed.
“You’re going to spank me?”
“Yes. I told you to keep still, and I also told you to keep your hands out of the way, above your head. You were a naughty girl, and now I intend to redden your cute little bottom and teach you a lesson, Callie.”
When she placed herself across his thighs, she gasped as he forced her legs wide apart.
“I want a view of your wet folds as I’m spanking you, Callie. You’ll keep yourself spread just like this,” he said, shifting her bottom higher on his lap.
Arousal escaped down her thigh, and his excitement rose at the knowledge that she was enjoying this as much as him. She gave another needy moan. She was breathing hard and every few seconds a shudder jolted through her. He cupped her bottom and gave it a squeeze.
“You were a very bad girl, weren’t you, Callie?”
She released a harsh breath. “Y-yes, sir.”