Book 6 in The Red Petticoat Saloon Series is brought to us by the lovely Alta Hensley...

Sickly. A whore. On her own.

That is how Della would describe herself, or did until she became a gem at The Red Petticoat Saloon. Still sickly, and still a whore, at least she wasn’t on her own any longer. She had become Citrine, one of Jewel’s gems, and she wore the name proudly.

It wasn’t until she became deathly ill that she realized just how much people truly cared about her. She had her friends at The Red Petticoat, and she soon had the care of the town doctor—Dr. Anson Norwood.

Dr. Norwood promises her that he will fix all that is wrong with his patient and treat her like the gem she truly is. But will the shadows of her past, as well as the ones of Anson Norwood, get in the way? Can she allow the good doctor to fully care for his Citrine? 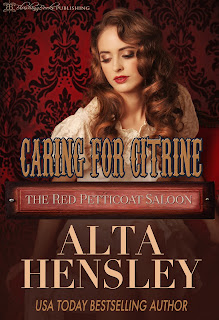 He pointed to her bed. “Bend over the bed, petticoat up, bare your behind.” His expression, his tone, his entire presence meant business. He was the disciplinarian sent to do a job. She’d known that the minute he led her upstairs.
“Gabriel, please. I will crawl in bed like a good girl. You don’t need to spank me.” It really was pointless trying to plead with him. All the gems knew that when Mr. Gabe had his mind set on something, no amount of pleading or arguing would get you out your predicament.
“You should have done that before. Now hurry along. It’s getting crowded downstairs, and I need to be there in case it gets rowdy.” When she didn’t move, he nodded toward the bed. “Come on, Della. You know you did this to yourself.”
Silently admitting defeat, she sighed and walked toward the bed. Staring at her floral quilt, she did as he asked, feeling the cool air against her bottom as she lowered her drawers and bent over the bed with her red petticoat flaring out around her. Her face heated with embarrassment. Gabriel had punished her before several times, and he had definitely seen her bare behind, but she still couldn’t help feel the shame of having to be thrashed like a naughty school child.
She cringed when she heard the swoosh of the leather strap being removed from his pants. Gabriel wasn’t one to go easy. When he was asked to deliver a punishment, it was always worse than if he decided to do it himself. Often enough, Della had heard the sound of leather striking naughty behinds of the gems and their cries, and she really did try her best to avoid such a wrath from Gabriel.
“Before I tan your backside, I want to make sure you understand why I am giving you this lickin’. Do you?”
“Yes, sir,” she mumbled against her mattress. “I was given strict instructions from Madame Jewel and Miss Nettie, and I didn’t follow them.”
The first lash of the leather cracked against her flesh without mercy. Della bit down against the pain and balled the petticoat into her fists to fight the urge to cry out. But when the second and then third whip of the leather made contact, she couldn’t hold back from crying out.
“Ow! Oh, I’m so sorry!” If there was ever a time to start coughing, it would be now. Maybe if she had another coughing spell, he would go lightly on her. But her cough had decided to betray her and remain deep within her chest.
“Stick out your bottom,” was his only response.
She did so and was only rewarded with another, and then another whip of the unforgiving leather. The spanking continued on as Della cried out. Tears ran down her face as her bottom heated to an inferno.
“Naughty gems get spanked. You know this, Citrine.” Gabriel only called her by her gem name ‘Citrine’ when she was on the floor or getting punished. All it took was him calling her Citrine in a warning voice to have her stop whatever she was doing right then and there. She loved Gabriel, but he was not one to disobey. The ass whoopin’ she was receiving this very moment reaffirmed that belief.

Caring for Citrine can be purchased at Amazon, Blushing Books, and Barnes & Noble for just $2.99. Hope you love the story as much as I did!